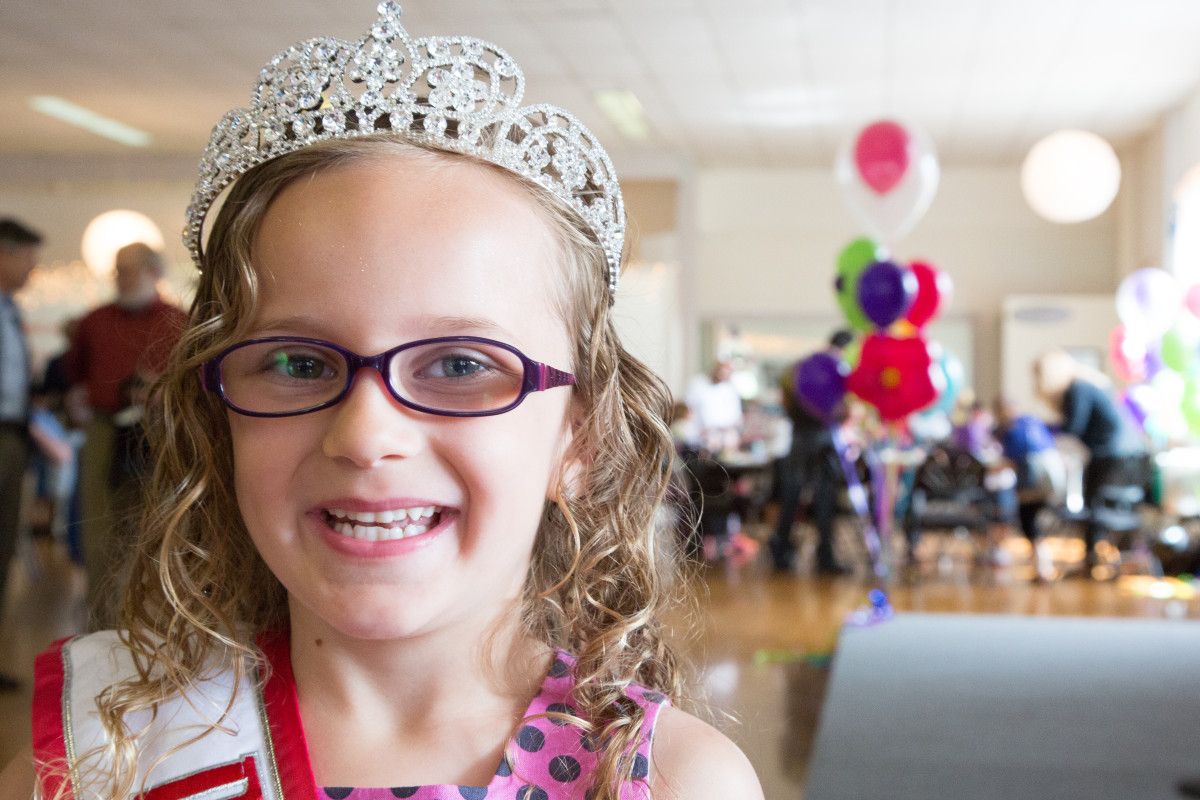 When asked by her mom to take off her glasses for a picture, 6 year old Ella Osborne, who was crowned Miss Oregon Princess at the National American Miss pageant this past May, simply replied, “Mother, I have to be myself. And who I am is wearing glasses.” Ella says she loves wearing her glasses and the only time she doesn’t like wearing glasses is when she forgets to take them off before she falls asleep.

Ella was diagnosed with a cataract, an eye disorder that causes vision to become clouded and blurred in one or both eyes.  At three months old she underwent patch therapy for thirty minutes a day until the age of two when she was prescribed glasses.

Ella’s vision disorder was detected at an early enough age that has allowed for successful treatment. She has been able to progress, in school and at home, despite having an eye disorder that threatens child development, especially during the critical preschool age. Early vision screenings for children are essential, as 80% of learning in the first 12 years comes from vision.

This upcoming November Ella will represent the state of Oregon in the National American Miss pageant in Southern California, where she also hopes to visit Disneyland. She enjoys hunting bugs with her younger brother Beckett, playing sports like soccer and baseball, and taking dance lessons in ballet, jazz, and hip-hop.  In her role as American Miss Oregon, Ella is asked to make a lot of public appearances.

Ellla was asked to speak at the See to Read kick off event, a program that will be providing free vision screenings to children ages 3-7 years old at public libraries across Oregon this summer. She gave a speech all by herself “with no books or anything,” and says she “was a little scared but not a lot.”

Articulate, opinionated, and kind, 6 year old Ella says her favorite part about being Miss Oregon has been smiling and waving at all the different people she has met. When asked what she would say to a child who doesn’t want to wear glasses, Ella says, “I would tell them don’t be sad. You need glasses to see better.”

Ella learned to read this past year in kindergarten and enjoys the Magic Tree House book series. As Ella begins drawing a picture of the sun, clouds, and a few birds on a piece of paper, her mom, Dehlia Osborne, points out that there are no clouds in the sky today. In response, Ella lets out a dramatic gasp, widens her eyes, and looks up at the sky. “The clouds are just hiding,” she says, “But I can see them! I have glasses!”

Osborne says her daughter has a strong sense of self because of her glasses. She has been able to find confidence because of her differences, which her mom is grateful for. Every activity Ella has done, from dancing to rock climbing, gymnastics, horseback riding, theater, and competing and winning the National American Miss pageant, have included her glasses.

Category: In the News, Uncategorized

← In the news: Oregonlive.com
Eye tests now a school requirement →